The Shroud Conspiracy by John Heubusch-Available with author's signature

Many visitors to the Reagan Library and members of the Reagan Foundation have had the opportunity to meet with or hear its Executive Director, John Heubusch, over the years. John has been honored to interview world figures, politicians and best-selling authors on the exclusive Reagan Library stage. In addition to his role at the Reagan Foundation and Library, John is also a proven writer with a good deal of work to his credit. His first novel, the Shroud Conspiracy, will be published by Simon and Shuster in March, 2017. Most of the proceeds from every one of his books bought from our store website goes directly to the Reagan Foundation and helps us to preserve and promote Ronald Reagan’s legacy. Here’s a summary of the book: “In this intense thriller, a brilliant forensic anthropologist sets out to prove that the famous Shroud of Turin, one of the most revered artifacts in Christianity and the supposed burial cloth of Jesus Christ, is a fake. But he quickly discovers the opposite could be true—and must race to stop the evil forces who want to use the Shroud for their ownevil designs. Throughout his career, forensic anthropologist and outspoken atheist Dr. Jon Bondurant has investigated many religious artifacts said to be real, but he knows better. Only weak minds rely on such obviously false relics to maintain their pointless faith. So when he is invited by the Vatican to examine the Shroud of Turin he is delighted for the opportunity to prove once and for all that the Shroud is a fraud. But when he meets Domenika Josef, the beautiful and devout Vatican representative who finds him arrogant and self-important, he realizes his task will not be as straightforward as he once thought. Domenika believes that the relic is real, and wants nothing more than to rescue the tarnished reputation of the church by announcing the good news of the authentic Shroud. As Bondurant and his team examine every element of the Shroud, he and Domenika begin to see each other in a whole new light. And as the evidence about the origin of this highly controversial piece of fabric starts to pile up, he begins to realize that he’s been blind to the truth in many ways. When a sample of the blood from the Shroud—believed to be the real blood of Jesus Christ—vanishes, he realizes his problems are just beginning. The DNA traces in that sample could have earth-shattering consequences if they fall into the wrong hands. When Domenika vanishes too, Bondurant is caught in a globe-spanning chase to rescue the woman he loves—and stop the evil forces who have their own motives for the Shroud.” This book will be available with Mr. Heubusch’s signature and personalized for the recipient if requested following the release of the book on March 14, 2017. All orders will ship after the release date. About the Author: “John Heubusch is the executive director of the Ronald Reagan Presidential Foundation and Library and the author of The Shroud Conspiracy and its sequel, The Second Coming. He has had a vast career in philanthropy, politics, public service, and the Fortune 500. He has served as the first president of the Waitt Institute, a nonprofit research organization dedicated to historic discovery and scientific exploration, and where he helped lead to the discovery, authentication, and preservation of the famed lost Gospel of Judas, the ancient text deemed to be heretical and ordered destroyed by the early Christian Church. Cited often by The New York Times, The Washington Post, and the Los Angeles Times, Heubusch has been a contributing writer for The New York Times, The Wall Street Journal, Investor’s Business Daily, Forbes, The San Diego Union-Tribune, and other leading publications.” 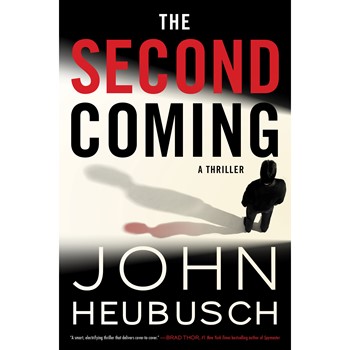 The Second Coming by John Heubusch-Available with author's signature