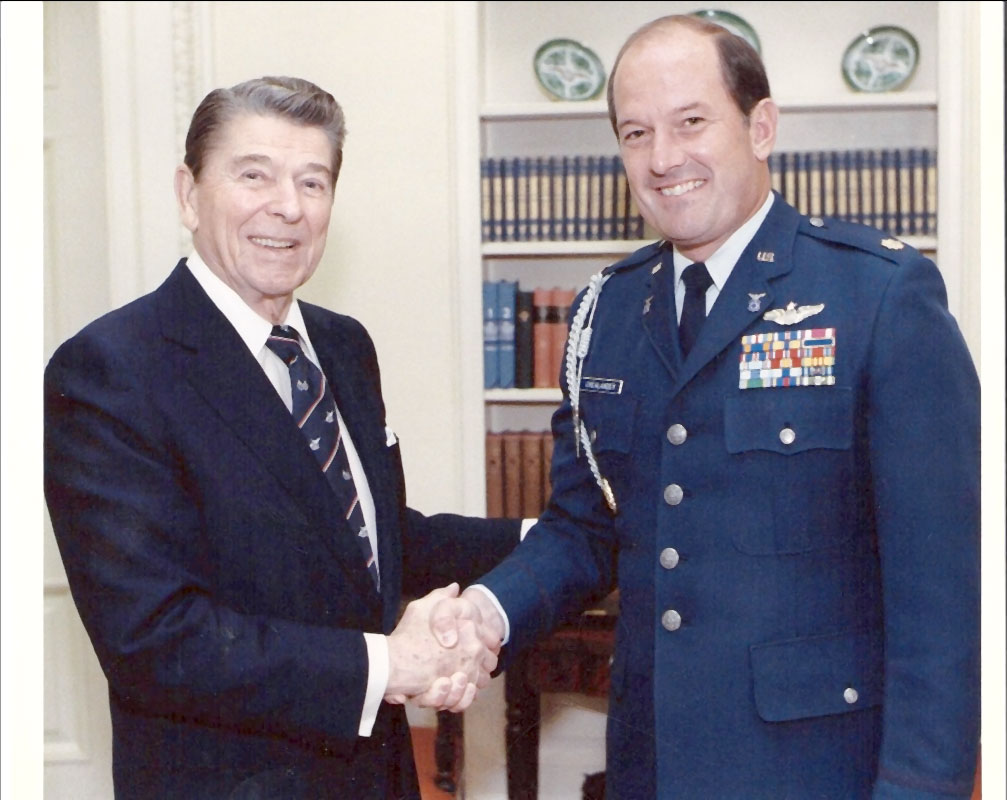 Join us for our Secrets of WWII Exhibit Lunch and Tour with special guest speaker, Steven R. Chealander. Mr. Chealander was sworn in as the 38th Member of the National Transportation Safety Board of the National Transportation Safety Board on January 3, 2007. He brings a wealth of both civilian and military aviation experience to the NTSB. Prior to joining the Board, he was with American Airlines, serving since 1991 as a pilot and Captain qualified on the DC-10, B-737, MD-80, and F-100 aircraft, and as a Chief Pilot in Los Angeles. At American, he also was a flight safety manager, performing safety and compliance audits and participating in investigations, and was most recently the Manager of Flight Operations Efficiency.

From 1964 to 1991, Mr. Chealander served in the U.S. Air Force, with tours of duty in Vietnam and Spain. An F-4 pilot and instructor pilot, and then a USAF Aggressor Pilot, Mr. Chealander was selected in 1981 to be a member of the USAF Air Demonstration Squadron, the Thunderbirds. He flew with the team until 1985, when he was assigned as a staff officer at Tactical Air Command Headquarters at Langley AFB, VA. In 1986, Mr. Chealander was selected as Military Aide to President Ronald Reagan. In this capacity, he performed a variety of ceremonial and emergency preparedness duties, including custody of the President’s emergency briefcase, “the football.” Subsequently, Mr. Chealander commanded an F-5 tactical fighter squadron at Williams AFB, AZ (1988-89), an F-16 squadron at Luke AFB, AZ (1989-91), and then was appointed Assistant Deputy Commander for Operations for the F-16 tactical fighter wing at Luke AFB. He retired from the Air Force in 1991 with the rank of Lt. Colonel. Mr. Chealander received a B.S. degree in Business Administration from the University of Southern California and did graduate studies at the University of Utah. He is married and the father of two daughters.

Following the served lunch, guests will have a chance to self-guide the Ronald Reagan Presidential Museum, Air Force One Pavilion, and our extraordinary special exhibition, Secrets of WWII. The Ronald Reagan Presidential Library has created a never-before- seen exhibit highlighting some of the lesser-known facts, or formerly Top Secret and recently declassified material, related to the largest war ever to be fought on the planet. The Secrets of WWII explores the fascinating elements and provides a compelling look at WWII, not for just its battles and the combatants, but digs deeper into the secrets of its guarded technologies, its unsung heroes, the popular culture of the time, the propaganda produced on all sides, the inventive methods of code making and code breaking, as well as shining a light on some of the controversies and the intrigue, much of which has not even been revealed until very recently.

This all-inclusive offer is only $66.00 per person (tax and gratuity included). Reservations are required and must be made by Monday, May 23 at 8:00 a.m. Make your reservations early before we sell out. Casual attire is suggested.