Celebrating one of America’s greatest presidents

Celebrating one of America’s greatest presidents

I was right out of college and heading to work on Capitol Hill on January 20, 1981 – the day President Reagan was inaugurated as America’s 40th president. That inauguration morning, I stood outside in the cold with so many others, anxiously waiting for him to take the podium at the west front of the US Capitol building.

I never could have anticipated how the turns of events during my career would bring me to the Ronald Reagan Presidential Foundation and Institute. While I didn’t have a front row seat that day, I am grateful to have one now preserving and promoting the legacy of a man who became one of America’s best and most beloved presidents.

From his inauguration speech in which he dedicated his presidency to all American citizens, to the courage and charisma with which he survived an assassination attempt on his life three months later, it was immediately obvious during his first year that there was something special about our 40th president. In fact, President Reagan was convinced that his life was spared so he could pursue peace. He committed himself toward a greater national purpose: Reviving the American economy while eliminating the Communist threat took on an even greater urgency. 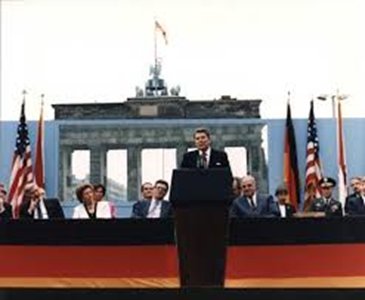 Over the course of the next eight years, President Reagan would diligently and unapologetically fight for the liberties of the American people and the God-given right to freedom for people around the world.

He built diplomatic relationships with allies and challenged the flawed philosophies of socialism and authoritarian rule. He didn’t make decisions or deliver speeches based on popularity, but rather principle. He ardently defended freedom and democracy at home and abroad, leading to world-changing achievements during his administration.

It is only right to celebrate 40 at 40, because his legacy and ideals live on in the hearts of Americans and through the commonsense conservative beliefs of policy makers. He was a leader that citizens could follow and was a man people admired. His “Reagan Revolution” sparked the hope and pride of millions who love America and believe in this “shining city on a hill” we get to call home.

Thank you for your role in promoting President Reagan’s core principles of individual liberty, economic opportunity, global democracy and national pride with us.

To learn more and follow along with all the planned commemoration activities this year, please visit: reaganfoundation.org/40at40.