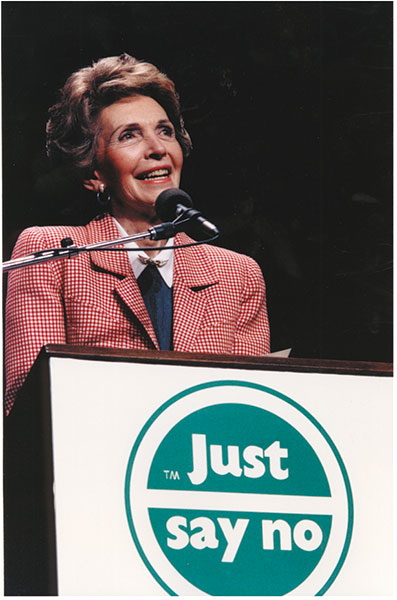 The #JustSayNo 2.0 Nancy Reagan Scholarship Competition invites high school and college students to compete for a total of $5,000 in college scholarships by updating the iconic 1980s public service campaign for the modern era. Students work individually to produce and submit an original :30 video public service announcement (PSA) to encourage their peers to stand strong against today's drug pressures.

Deadline: March 27 or until the first 100 submissions are received, whichever comes first.

The application is now closed. Candidates will receive feedback in late April.

Submissions will be evaluated by a selection committee based on their:

An internal committee will review the submissions to identify finalists. Members of the Nancy Reagan Centennial Committee will identify two recipients.

Two winners will be selected to each receive a $2,500 college scholarship and will be invited, along with a parent, to be officially recognized during the Nancy Reagan Centennial in summer 2022.

About the “Just Say No” Campaign

Championed by First Lady Nancy Reagan, "Just Say No" was a public service campaign that discouraged children from using drugs. Throughout the Reagan Administration, Mrs. Reagan traveled the nation and the world bringing her message to young people in partnership with some of the most iconic celebrities of the 1980s. By 1988, more than 12,000 "Just Say No" clubs had been formed. The results were encouraging: cocaine use by high-school seniors dropped by one-third, the lowest rate in a decade.

“Drugs take away the dream from every child’s heart and replace it with a nightmare, and it’s time we in America stand up and replace those dreams.” - Nancy Reagan
© 2022 Ronald Reagan Presidential Foundation and Library. All Rights Reserved. .